It's been almost two years since I started this blog.  I'm no longer amazed at the symmetries of life.  I started boyspacefriend after a funeral, and now I'm ending it after another funeral.  The grief unleashed by the sight of pink and white balloons floating into the sky, the incredible bond between a group of lifetime friends, the tragedy of a decent and brilliant individual wasted by arrogance and accident - these are the things that fill me with perspective.  Being emo is a farce, being outraged is pretentious, without being anchored by loyalty and love to the people dearest to us.

This week my failure and my success in doing that anchoring was brought into spectacular contrast.  It's been two years in coming, but I - we - have finally closed the circle that began with secrets and lies and ended with forgiveness and respect.  Now it's time to end this chapter, built on the aimlessness and the dislocation and the mistakes that define all transitions, and move on.  Regrets are wiped away, reputations are accepted, relationships are clarified.  Some may come later than others, but I have faith that they will come.  It just takes time to untie all the knots and unite new ones.

"Forgive and forget. That’s what they say. It’s good advice, but it’s not very practical. When someone hurts us, we want to hurt them back. When someone wrongs us, we want to be right. Without forgiveness, old scores are never settled… old wounds never heal. And the most we can hope for, is that one day we’ll be lucky enough to forget."

... to bring you the UP Centennial Commemorative Plates for sale at P3,500, guaranteeing exemption from color coding.

One of my favorite expressions over the past couple of years was in search of sunrise - because it seems like I spent most of my twenties waiting for it.  I've graduated, gone back to school, got a job, became a bum, fallen out of relationships, fallen into relationships, changed plans and switched priorities.  Sometimes I think I've even reconceptualized myself - as myriad people who have claimed over the past few years that they "don't know me anymore" can attest to.

But all that's done and gone by.  Last Friday's festivities were the cherry on the cake, a chance to celebrate with the people who've kicked my ass and held my hand in equal measure as I went through one epic emofest.  I promised myself I'd write down what I've learned over the past couple of years, if only to mentally prepare for the next bout of self-inflicted crisis.  Dedicated to the casts of Entourage and Grey's Anatomy.

1. Sometimes the only way to succeed is to quit.

2. Being judgmental is the surest way of being a hypocrite.

3. The people you work with matter just as much as the work itself.

4. When someone consistently makes you feel bad about yourself, it's not a coincidence.

5. Unless you're asking it from God or your parents, never expect forgiveness.

6. Just because you were wrong doesn't mean the other person was right.

7. Most people can't distinguish between aimlessness and figuring things out.

8. You'll always have options - don't be afraid to take them.

9. When the bulls start running, you should go and jump right in front of them.

10. Preferring the long scenic route or the short bumpy one is a matter of preference, not a character flaw.

ALL ALONG THE WATCHTOWER
Bob Dylan

"There must be some way out of here," said the joker to the thief,
"There's too much confusion, I can't get no relief.
Businessmen, they drink my wine, plowmen dig my earth,
None of them along the line know what any of it is worth."

"No reason to get excited," the thief, he kindly spoke,
"There are many here among us who feel that life is but a joke.
But you and I, we've been through that, and this is not our fate,
So let us not talk falsely now, the hour is getting late."

All along the watchtower, princes kept the view
While all the women came and went, barefoot servants, too.

Outside in the distance a wildcat did growl,
Two riders were approaching, the wind began to howl.

It would seem obvious that I haven't exactly been paying attention to LJ for awhile.  Like similar Internet fads before it (think Friendster) I suppose the appeal of blogging wore off.  Plus the fact I got bored with my layout and didn't have the means to change it, but that's another story.

Mostly I suppose it's thinking about what I want

boyspacefriend to be all about - and I've decided to keep this a purely fun/personal interest blog.  Not that I've decided to keep my opinions, political or otherwise, to myself all of a sudden despite what my brother reports are repeated attempts to tar and feather my name in UP because of my anti-egg/mudslinging stand a couple of months ago.  Since my "fascist" and "military-loving" tendencies obviously don't extend to my (or rather my mouth's) love of free speech, I'm in the process of setting up a new blog for pure commentary.  Abangan.

What motivates me to post today however is not another hypocritical leftist outrage or useless political posturing (although since it's election season there's plenty of THAT to go around).  Two things near and dear to me: classical history, and kick-ass movies.  Ladies and gentlemen, 300. 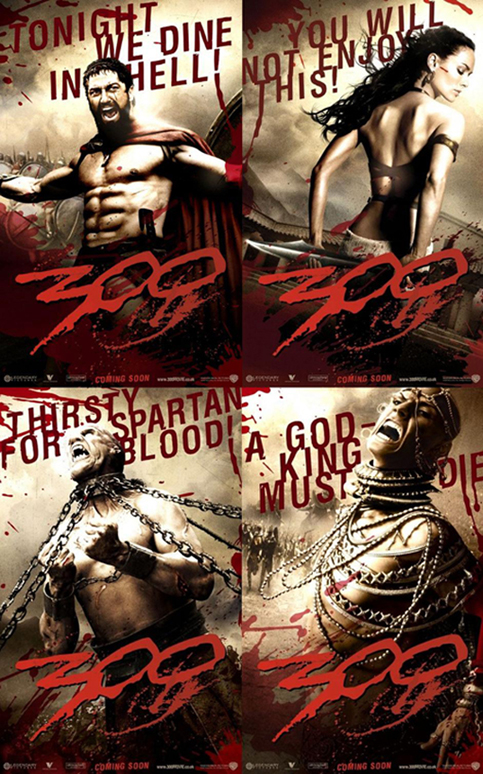 I'm a bit disappointed with Rotten Tomatoes though, because last week 300 was at 100% fresh.  Obviously I thought the movie was insane (in a good way).  The cinematography, the pacing, and the acting all hit the right tone - it's one of those genre-defining battle movies that will stand as a fan favorite.  One reviewer said the battle scenes were so "over-the-top" they were "hilarious".  I don't quite know what she expects when 300 Spartans go up against a million-man horde.  Maybe she wants monologues and soliloquys while the Spartan phalanx engages the Xerxes's Immortals?  This is a homage to a comic book, which was itself a homage to an epic battle.  Don't let the idiot critics stop you from appreciating the good old-fashioned heroism at the heart of this movie.  (As

chibi_leon pointed out, someone on Rotten Tomatoes posted "THIS IS BLASPHEMY! THIS IS MADNESS!" in response to that critic.  Fucking classic, thanks Chibs.  The rest of the user comments to that critic are pretty funny as well, read more here.)

And that's why this movie succeeds.  Because it breathes life into the source material, a story that has stood the test of time as one of the most famous sacrifices in human history.  The Battle of Thermopylae (which literally means the "Gates of Fire" or "The Hot Gates") was a strategic effort by the Spartans and their Greek allies to delay the Persian invasion while Sparta and Athens cobbled together the Greek city-states into a Hellenic coalition able to resist the mammoth forces of Xerxes.  While the movie takes some liberties with the back story (there's the internal politicking in Sparta which I won't spoil), the Spartans actually had a couple of thousand auxiliary units with them to hold back the onslaught.  Although Leonidas and his Spartans were massacred to the last man, their stirring sacrifice at Thermopylae - fighting in the face of certain death to preserve Hellas - inspired the Greeks to defeat the Persians a year later, first in the naval battle of Salamis where the Athenians took revenge for the sacking of Athens, and then in the battle of Plataea where the Greek heavy infantry defeated the numerically superior but lightly armored Persian armies.   Thermopylae and the Spartans helped save Greece from being swallowed by an Oriental empire, and the period immediately after the war began the golden age of Greek civilization centered on Athens, producing such notable Western institutions like democracy, reason and the citizen-soldier.

So the arc of the story is epic; and the movie is a fitting tribute to that, with the battle itself giving LOTR: Return of The King's siege of Gondor (one of my personal favorites) a run for its money.  Although I'll concede the rhetoric about reason and freedom in the face or Oriental despotism may be grating to some, it never approaches George W. Bush proportions and is a tiny nuisance compared to how awesome the movie is.  Like V for Vendetta last year, this is 2007's first must-see movie for me.

WHAT I DIDN'T KNOW
Athenaeum

Say that you'll stay a little
Don't say bye bye tonight
Say you'll be mine
Just a little of bit of love
Is worth a moment of your time
Knocking on your door just a little
So cold outside tonight
Let’s get the fire burning
Oh, I know, I keep it burning right
If you stay, won't you stay stay

This just might hurt a little
Love hurts sometimes when you do it right
Don't be afraid of a little bit of pain
Pleasure is on the other side
Let down your guard just a little
I'll keep you safe in these arms of mine
Hold on to me pretty baby
You will see I can be all you need
If you stay, won't you stay stay

Make time to live a little
Don’t let this moment slip by tonight
You never know what you are missing until you try
I'll keep you satisfied
If you stay, won't you stay stay

Don't worry, there are no spoilers for Borat - because even if I told you what happens in the movie, there's no way it can possibly ruin the experience of WATCHING it.  I'm amazed the MTRCB allowed the whole thing to be shown without any cuts.

The audience was probably laughing 90% of the time, and there was one scene involving a fight over a Baywatch scrapbook that had people howling (or cringing).  Other favorite scenes are the fat Southern prostitute and the stupid Pentecostals.  Most Americans are bad enough, but putting evangelical Christianity in the mix brings them to the next level of unbelievable idiocy.

Unfortunately, since the "mockumentary" was made under not exactly straightforward premises, some of those involved in the movie are beginning to sue the film studio, including the frat boys who thought America would be better if the could have "slaves," the Southern dinner hostess who had to teach Borat how to use the toilet bowl after he brought shit in a bag to the supper table, and even the Romanian villagers who played his mom and other people in his hometown.r my red

You are The Magician

Eloquent and charismatic both verbally and in writing,
you are clever, witty, inventive and persuasive.

The Magician is the male power of creation, creation by willpower and desire. In that ancient sense, it is the ability to make things so just by speaking them aloud. Reflecting this is the fact that the Magician is represented by Mercury. He represents the gift of tongues, a smooth talker, a salesman. Also clever with the slight of hand and a medicine man - either a real doctor or someone trying to sell you snake oil.

What Tarot Card are You?
Take the Test to Find Out.

"Success is the ability to go from failure to failure with no loss of enthusiasm."

“You have enemies? Good. That means you've stood up for something, sometime in your life.”

"There are a terrible lot of lies going around the world, and the worst of it is half of them are true."